Father G, I did not go into the details in the article, but you have noticed a slight confusion between the GIRM and the rubrics printed in the Missal itself. The rubrics in the Missal specifically indicate that the sign of the Cross is made facing the people although this is not so clear from the GIRM. Hence, I will modify that portion of the post accordingly - thank you for the insight! I also agree that it would perhaps be more fitting to face ad orientem for the confiteor, especially given the indications from Cardinal Sarah.

How does one position the priest's chair in an ad orientem Mass?


Given that the GIRM anticipates the Introductory Rites and the Collect being said while the priest stands at the chair, I presume he turns ad orientem while standing in that position? Schaefer [parishioner of St. In any case, any appearance of a throne is to be avoided. We already can see in this instruction the mischief that Msgr. It is important to note what precedes this, i. Yet there NEVER was a decree ordering that all existing church structures must undergo any changes whatsoever. Much of the current liturgical mess is the result of an erroneous understanding of the ancient layout of the early Roman basilicas.

The Mass of All Time - Angelus Press

The awkwardness of this arrangement never caught on elsewhere, the more common arrangement being for the altar to be placed in the East end, so only the priest had to turn. Klaus Gamber; English edition, with preface by Jos. Cardinal Ratzinger later Pope Benedict , published in Dear Father, what direction is the priest facing for the proclamation of the readings and Gospel? I have read the article but I am a little tired and can't make it out. Many thanks and God bless. The reason for the confusion is that the previous edition of the Roman Missal stated that the priest makes the Sign of the Cross before turning towards the people: GIRM "The priest then goes to the chair.

After the entrance song, and with all standing, the priest and the faithful make the sign of the cross. He or some other qualified minister may give the faithful a very brief introduction to the Mass of the day. THEN the priest, facing the people, extends his hands and greets all present with one of the following greeting This is what I did when I was ordained a priest and began to celebrate Mass ad orientem myself.

I was left confused when the third edition came out because of the apparent discrepancy between what GIRM states and the rubric in the Order of Mass. So, then, I should be facing the people for the Sign of the Cross from now on? Fr G, It appears that, yes, technically the sign of the Cross should be made facing the people Though it is difficult to be sure what is truly the intent of the Church given the ambiguity in the GIRM and the rubrics.

Personally, I do face the people for the sign of the Cross. The difficulty of saying Mass ad orientem is the nature of the NO itself. I have been a priest over 35 years, and say the traditional latin Mass on sunday, I have 6 masses in my parish and twice in the week. 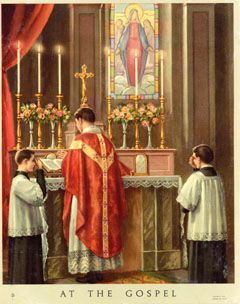 I tried for many years to 'pretend' that the new was simply an modern expression of the old, but it's not. The new Mass I feel demands an engagement of personality with the faithful. Danhesco, The temptation to lose hope is a real danger, don't give in! We simply must not abandon the tradition when sayinf the Novus Ordo - as your brother priest, I heartily encourage you to offer Mass ad orientem as the norm, to simply do so at random moments is extremely harmful to the Liturgy and the faithful.

Follow Sarah and Benedict - make the switch. Dear Father, Thank you for this. It is so clearly written that even the most blind should be able to see. With gratitude, Giuseppe. Post a Comment When commenting, please leave a name or pseudonym at the end of your comment so as to facilitate communication and responses. Comments must be approved by the moderator before being published. Som e even offer the Mass entirely in Latin. In addition, the priest usually faces versus populum , or toward the people across the altar. However, at no point in the liturgical reform was this prescribed or even suggested.

The rubrics of the Mass suppose that the priest is following the more traditional practice of facing ad orientem , or toward the east, as is done in the traditional Latin Mass.

Commentary on the Proper Prayers of Advent from the Roman Missal

Although less common, some priests do offer the Novus Ordo ad orientem. The altar is covered with at least one white cloth.

The Latin Mass: Collecting the Available Graces at Mass

Two, four, or six candlesticks are lit on or next to the altar. For Sundays and holy days of obligation, four or six are recommended. A crucifix is on or near the altar. Alternatively, these may be carried into the sanctuary at the beginning of Mass.

Popular Posts of the Past Month

The priest wears the amice, alb, cincture, stole, and chasuble. The deacon wears the amice, alb, cincture, stole, and dalmatic, though the dalmatic is optional. Maniples are not used. At the beginning of Mass, the priest enters in procession, preceded by the servers and deacon. The deacon carries the Book of Gospels in the procession. As they enter the church, the choir sings the Entrance Chant , which is proper to the day and usually taken from a psalm. It may be replaced with another psalm or another liturgical chant. After bowing to the altar, or genuflecting if the Blessed Sacrament is reserved there, the priest and deacon both immediately ascend to the altar and kiss it, honoring the relics of saints enclosed in the altar.

The deacon places the Book of Gospels on the altar, and t h e priest incenses the altar. They then go to the chair to begin the Mass. It is usually placed on the Epistle side of the sanctuary facing either toward the people or laterally across the sanctuary. Mass begins with the Sign of the Cross, followed by a greeting to the people. There are three different options for the greeting. The people's response is the same in all three cases.

The priest or deacon may then give brief commentary on the Mass of the day. As in the traditional form of the Mass, we must open the sacred liturgy by seeing ourselves as the sinners we are and praying for God's mercy. We do so here in the Penitential Act.